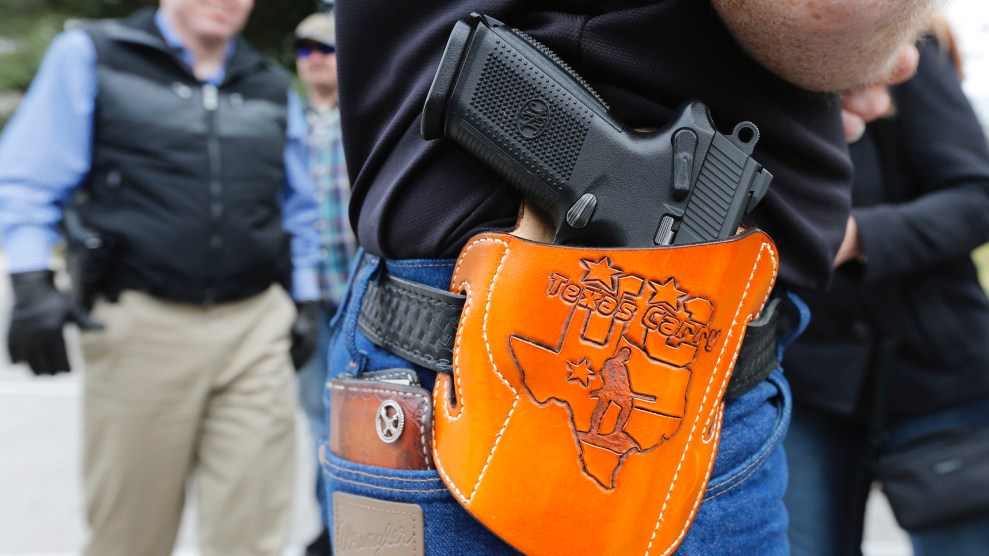 During a trip through Texas last month, I found myself waiting in the security line at the state capitol. In order to enter, I had to pass through a metal detector. But to my left there was a separate line: it allowed Texans with handgun permits to enter the building uninspected. Now, amidst yet another round of mass shootings, Texas is moving towards getting rid of those permits altogether.

This week, the Texas House of Representatives passed a bill that would allow adults to carry handguns without first getting a license to do so. If the bill became law, Texas would become the 14th state to pass a so-called “constitutional carry” bill. Texans over the age of 21 would no longer need to take a safety course and pass a test at a shooting range to carry open or concealed handguns.

The Texas House passed the bill on Thursday in a 84-56 vote. That evening, the NRA celebrated the news with a tweet that included a celebratory emoji. A few hours later, in the latest in a string of mass shootings, a man killed eight people at a FedEx facility in Indiana.

Permitless carry used to be a fringe position in Texas and across the country. As the Texas Tribune reported, Republican Lt. Gov Dan Patrick said in 2017, “with all the police violence today we have in our state…law enforcement does not like the idea of anyone being able to walk down the street with a gun and they don’t know if they have a permit or not.”

For years, Texas legislators avoided voting on permitless carry, despite pressure from gun advocates. Democrats argued against the bill by pointing to mass shootings like the massacre in El Paso that left 23 people dead in 2019. The Houston Policer Officers’ Union, as well other law enforcement groups, also spoke out against the bill. “We feel it would be a danger to a general public, and we’re against it,” Douglas Griffith, the president of the Houston police union, said. “I think it’s very important when you’re talking about people having something that could take someone’s life that they have to be trained in that.”

But, in a sign of how quickly things have shifted, seven Texas Democrats supported permitless carry this week. The state Senate may still block the bill, but just getting it passed in the House is a bad sign for gun control advocates in Texas.