Joe Biden’s campaign has claimed he doesn’t need to win Iowa and New Hampshire to become the Democratic presidential nominee. Instead, the former vice president has his eyes on states No. 3 and 4 on the primary calendar — Nevada and South Carolina — plus the 14 states that will vote on Super Tuesday, just three days after the South Carolina primary.

The logic makes a certain amount of sense, too. Biden polls better than other candidates among black and Hispanic voters, so the states after nearly-all-white Iowa and New Hampshire definitely play to his strengths, as they’re far more diverse and representative of the Democratic Party. There’s just one problem: Since 1976, when the Iowa caucuses first became an influential part of the nomination process, the eventual Democratic nominee has almost always won either Iowa or New Hampshire (or both). In fact, there’s only one time this didn’t happen — Bill Clinton in 1992, and the circumstances were unusual.1

But maybe there’s a case to be made that Iowa and New Hampshire don’t matter as much for the Democrats as they once did. The states have never offered that many delegates, and their electorates don’t look much like the modern Democratic Party. Arguably, winning South Carolina’s black voters or clinching California on Super Tuesday could matter a lot more. Of course, it’s hard to argue that losing the first two states in the primary is a good strategy — and to be clear, the Biden campaign hasn’t argued they don’t want to win Iowa and New Hampshire, just that it’s not essential. So does the Biden camp have a point? Let’s go over the case for Iowa and New Hampshire mattering as much as they always have in the Democratic primary — and the case for their declining importance.

Case 1: Iowa and New Hampshire are as important as ever

Following reforms to the primary system in the 1970s and Jimmy Carter’s surprise victory in the 1976 Iowa caucuses, both Iowa and New Hampshire have become highly influential primary states, as they are the first two to vote (although there have been several unsuccessful efforts to change that).

Winning Iowa or New Hampshire will likely be critical for someone in the 2020 Democratic primary, too, especially if the same candidate wins both states. Sen. Elizabeth Warren is currently in the lead in both places, according to a FiveThirtyEight average of polls in Iowa and New Hampshire since the third Democratic debate in September — although she barely leads in Iowa. She has a narrow 1-point lead over Biden in Iowa and a 4-point edge in New Hampshire, according to our analysis. (RealClearPolitics’s average puts Warren roughly 3 points ahead of Biden in New Hampshire and less than a point behind Biden in Iowa.) But in both states, we’re only talking about a few points separating the top two candidates, so to be clear, the race is still incredibly tight.

And that’s important, because the margin by which a candidate wins Iowa or New Hampshire can have big consequences for the primary. A narrow defeat, for instance, wouldn’t necessarily spell doom for Biden’s campaign. Instead, it could give them an opportunity to spin the loss and talk about the relative lack of diversity in the first two states, said Josh Putnam, a political scientist and FiveThirtyEight contributor who tracks the nomination process. Putnam argued that a defeat by a wide margin would be harder to sell, and Caitlin Jewitt, a political scientist at Virginia Tech who studies presidential primaries, agreed. Jewitt stressed, however, that even a loss could be considered a good showing if the candidate lost by less than predicted. “It’s important to win in Iowa and New Hampshire,” said Jewitt. “But it’s almost more important to do better than you were expected to do.”

Winning or exceeding expectations in Iowa or New Hampshire seems to have a real effect on Democratic primaries, too — especially as it pertains to a candidate’s ability to attract national support. Take John Kerry in 2004. He was polling at about 8 percent nationally before Iowa, but after he won both Iowa and New Hampshire, his numbers went through the roof — a 37-point gain in the polls in a couple weeks — as he steamrolled to victory at the expense of opponents like Howard Dean. Similarly, in 2008, Barack Obama trailed the favorite, Hillary Clinton, by double digits in national polls, but after he won Iowa, he gained nearly 10 points in national support, even though Clinton recovered to win New Hampshire. Eventually, Obama won the lengthy nomination battle. And while Bernie Sanders didn’t win the Democratic nomination in 2016, his strong start in Iowa and New Hampshire helped force Clinton, once again the favorite, into a drawn-out race.

The bottom line is: Winning or at least outperforming expectations in Iowa and New Hampshire will likely still matter a lot in the Democratic race this year. As Jewitt told me, “If you do well [in Iowa or New Hampshire] … you get more media attention,” and this often means “a rise in the polls, and you get more fundraising.” And as we’ve seen in recent primaries, strong performances in these states can set a candidate up for success.

There is an argument to be made, however, that while they’re still pivotal for winnowing the field, neither Iowa nor New Hampshire is as critical as they have been historically for securing the Democratic nomination. The main reason being that Iowa and New Hampshire don’t look like the national Democratic Party and, therefore, might not be the best indicators of what the party wants. In 2016, the primary electorate in those two states was 91 percent white and 3 percent black while the national Democratic primary electorate was 66 percent white and 20 percent black.2 Whereas the 14 states that vote on Super Tuesday (March 3) look much more like the Democratic Party — 62 percent of these voters were white in 2016 while 18 percent were black.3 Many of these states also offer far more delegates than either Iowa or New Hampshire — California has the most Democratic delegates and will be voting on Super Tuesday next year, as will Texas, which has the second-most delegates. 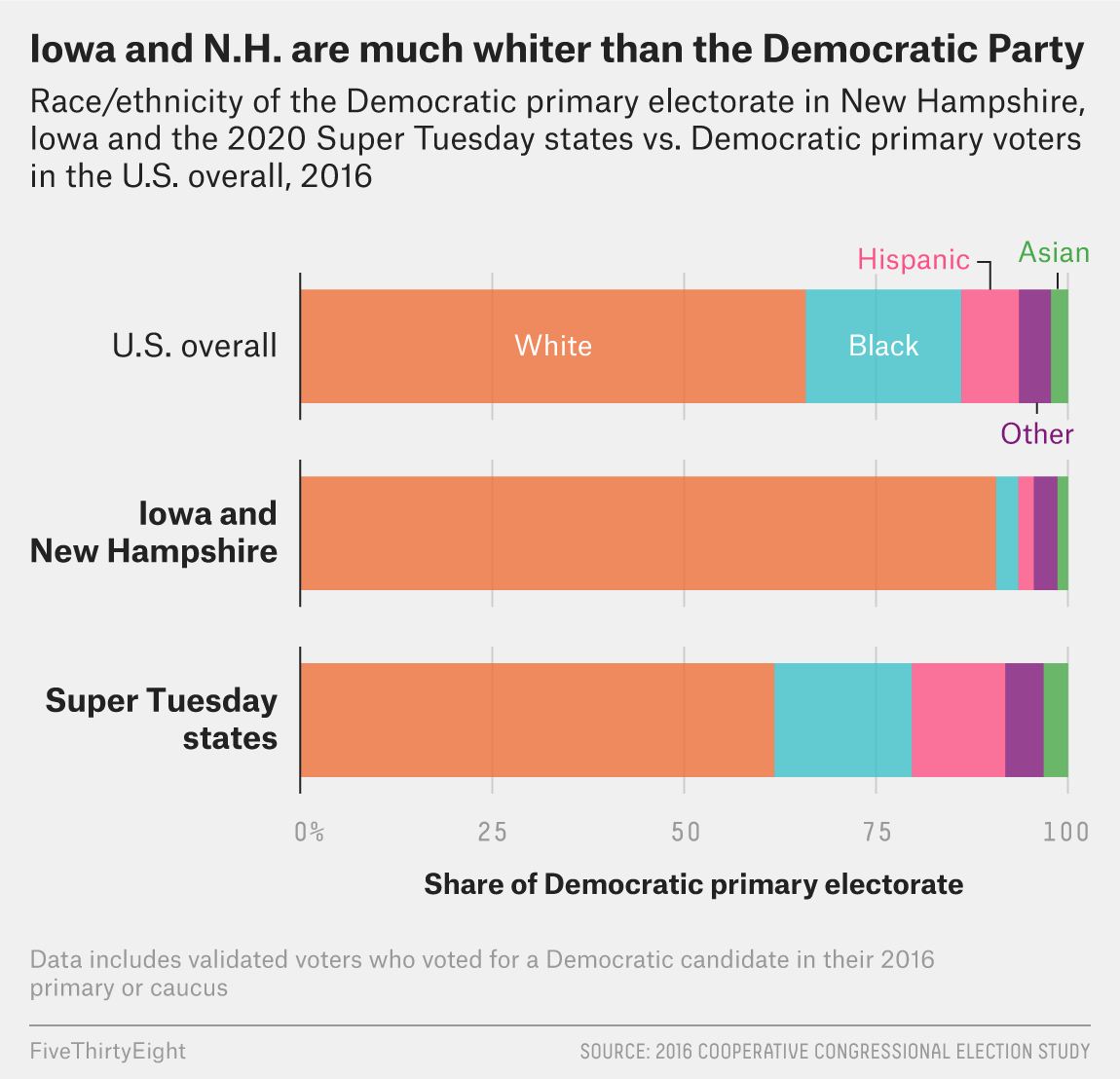 The media might also be more receptive to the idea that Iowa and New Hampshire aren’t representative of the Democratic Party, which may make them less important this year. Already there have been a number of stories about how the primary calendar — especially the Super Tuesday states — may shake up which states matter most to candidates. And as CNN analyst Ronald Brownstein wrote in February, the 14 states voting on March 3 “could advantage the candidates best positioned to appeal to minority voters, particularly African Americans.” So if Biden retains his solid support among African American voters and his campaign’s effort to lower expectations in Iowa and New Hampshire works, Biden might get what he wants — South Carolina and Super Tuesday as his real campaign tests.

Having now looked at the cases for and against Iowa and New Hampshire’s continued importance in the Democratic presidential primary, I do think it’s possible that these two states won’t matter as much. But I can’t help but suspect they’ll be as influential as ever. And that’s because even if the media is warier of the unrepresentative demographics of the first two states, it would still be tough for Biden to recover from dual losses at the beginning of the primary calendar. Remember, Bill Clinton is the only Democratic nominee since 1976 who lost both Iowa and New Hampshire. The winner(s) would likely get glowing coverage, too, while Biden would face more scrutiny. Defeat could also raise doubts among his supporters, given that “electability” is a central selling point of his campaign. And donors, with whom Biden is already struggling, might lose faith in him as well. So as long as Iowa and New Hampshire still get to go first, they’ll probably continue to have an outsized influence on the nomination process.