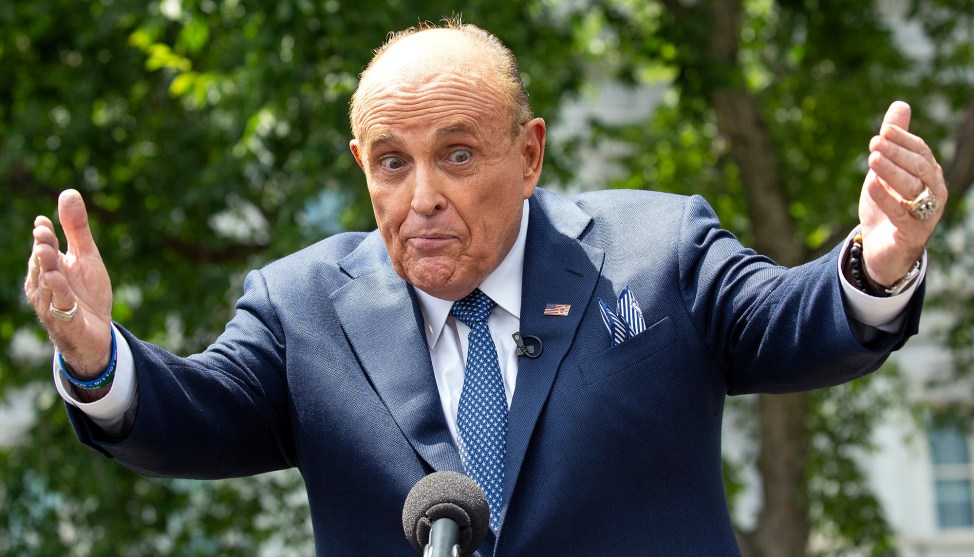 Rudy Giuliani demonstrating something or other to the press after a television interview.Stefani Reynolds/CNP via ZUMA

The bombshell story of Hunter Biden’s computer goes something like this: Rudy Giuliani was strolling around in Wilmington one day when he noticed a hard drive lying on the sidewalk. When he hooked it up, it turned out to be full of incriminating evidence about Hunter Biden’s lobbying for a Ukrainian energy company, along with some risque photos. What luck! So he gave it to the FBI and turned over a copy to his pals at the New York Post, who put it all on their front page.

OK, that’s not exactly how it happened. But it might as well be, since the actual story is hardly any more believable. Tonight, the New York Times provides some hints about what probably really happened:

….Mr. Giuliani has made multiple trips to Ukraine to gather material that is damaging to the Biden campaign, and his December visit came as he tried to shift the political conversation from impeachment proceedings against Mr. Trump to unsubstantiated claims about Mr. Biden’s wrongdoing.

Conservatives are apoplectic that mainstream news organizations are mostly ignoring the hard drive story (so far) and that both Twitter and Facebook initially acted to limit the spread of the Post story. And I hardly blame them for being disappointed. After all, this kind of thing has always worked so well in the past, so why not this time too?

That’s hard to say. The optimistic take is that everyone has learned a lesson from 2016. The less optimistic take is simply that (a) Giuliani is a nutcase these days, and (b) he’s been publicly searching for precisely this kind of thing for over a year. It’s hardly believable when he comes up with precisely what he wanted just three weeks before the election.

Republicans are mostly hanging back on this story, since they know it could blow up any moment. However, the Senate Judiciary Committee plans to open an investigation of Twitter, apparently as a safe way of keeping this story in the spotlight without actually taking a stand on it. Stay tuned.